COMPANIES SHOULD BE CHANGE AGENTS

Right from the start of Partners at Work one of its main objectives has been to promote diversity on every work floor. Recently Partners at Works Josephine van der Vossen-Jonker and Mink Bölger-Roelants hosted a round table with top women of the financial and business services industry. The participants brought much more to the table than just gender diversity, as they all have a multi-cultural background. In a lively discussion they shared among other things their vision on the Dutch working climate, the potency of cultural diversity in a company and their personal purpose in their career. They also took the opportunity to make their call for action, as optimal diversity appears to be work in progress.

Apart from gender and from international roots the four round table participants have another thing in common: their conscious choice of an employer with an eye for diversity. ShengSheng Zhang (Quantstrategist at BMO), Lilla Nwenu-Msimang (Director at PwC), Gül Poslu (Head of Consultant Relations Netherlands at NN IP) and Meltem Koning-Gungormez (Corporate lawyer and partner at KVDL) all are content with their employers diversity policies. Although there always is room for improvement, as they pointed out during the discussion at the Partners at Work office in Bussum.

Their background is of extra value to their employers as well as to their customers. ShengSheng was born and raised in China. She works for fourteen years in the Dutch financial sector and acquired a broad experience with the Dutch environment and the ‘very male’ financial industry. However she appreciates the Dutch working culture of flat organisational structures and informal communication. How has she coped with the challenge of learning the language? “In my first job at Delta Lloyd I quickly understood that a good passive understanding of Dutch was important as that kept me in touch with whatever my colleagues were discussing. Apart from the Dutch courses I followed, I picked up much just by operating in the Dutch financial environment I worked in. As a consequence my professional Dutch level is much higher than my personal Dutch. But I’m managing to hold my own. My current colleagues at BMO talk in Dutch and I respond in English.” Which is more of a brainteaser to her colleagues, she adds laughing.

Lilla, who has British, South African and Hungarian roots, found it practical to first focus on her job when she settled in Amsterdam almost four years ago. Dutch is important but not indispensable on the work floor, she thinks. “In my fields of experience, like governance and business intelligence, all discussions are in English. Nonetheless I am motivated to improve my Dutch, if only to be able to assist my son at his homework.”

Cultural diversity is richly represented around the discussion table. Gül has Turkish parents and tries to raise her son and daughter bilingually, which is a challenge but a valuable one she believes. “Cultural diversity is vital and also adds value to working processes. As an international company with offices everywhere and employees from all over the world NN IP facilitates to learn to work together and be open minded. By being non-judgemental and able to let go of your own preconceptions you create an open culture, and that helps to attract a range of different people. Which is good for every organisation.”

“At my office there is diversity on every level, and that is just the diversity you want”

Born in Rotterdam Meltem is the daughter of a Turkish father and a Greek mother who is an example to her. “She worked fulltime, like my father. My childhood was a happy one and I feel privileged being born here and raised Dutch but with a Turkish twist.” That twist has surpassed a generation as Meltems mother speaks Turkish with Meltems two sons now. “They do much better than my Dutch husband, who has mastered two Turkish words so far.” Working in the world of the big legals, Meltem is happy at KVDL. “Law firms are very traditional with a lot of hierarchy. The sector is really trying to be more inclusive, but in practice that proves to be very difficult. KVDL however is very different form the traditional legal firms. A main force that drives diversity is background. At my office there really is diversity among my Dutch colleagues on every level, and that is just the diversity you want. And what we lack, an alpha male environment, is something you can very well do without.” That atmosphere of inclusivity, she concludes, is exactly why compared to other law firms so many women work at KVDL. 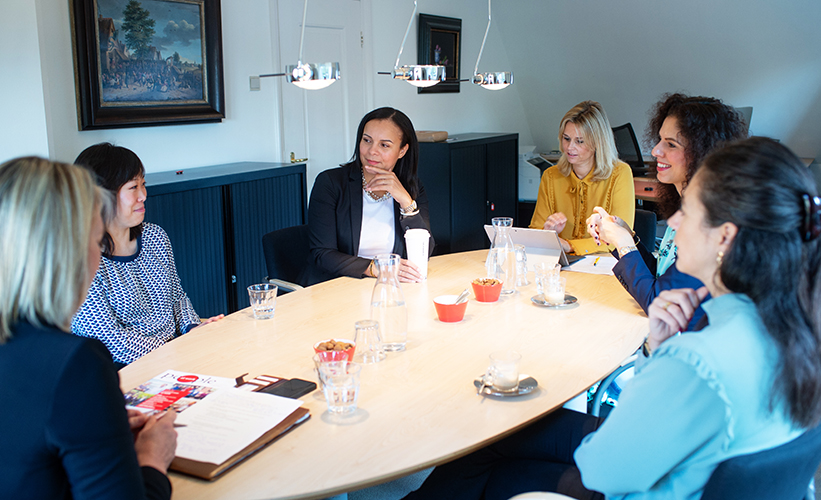 Breaking the myth of investment banking

Lilla tackles that theme to dispel the myth of investment banking. “I used to work at Morgan Stanley but, contrary to what you would expect, not in a stereotypical male environment. The culture was very diverse and the company was not only directed at financial gains but at societal needs as well.” The same applies to PwC, she proceeds. “With thirty percent of female leaders, both partners and directors, we have an excellent gender diversity score. Even within the Big Four.” With regard to cultural diversity the participants arrive at the joint conclusion that you need to create an open atmosphere to start with and that companies should be change agents. “Companies have to thrive compassion, should open doors and empower people”, says Lilla.

There is general agreement on the statement that female role models are essential for young women who are busy building their career. ShengSheng mentions her mother in this respect. “She had a bigger career than my father. In China it is normal for females to have a career. And yes, it is inspiring to look at female examples and more specifically to female characteristics, as we already have enough male characteristics to study.” “I have very strong women around me”, Gül adds. “My mother and grandmother, as many other women, are the ones who coordinate the whole family. My grandmother knows all the touching points, how to bring family members together. She is like a spider in the family web and a real inspiration. For the same reason good leaders are important role models within companies.”

Meltem agrees to the importance of examples, but follows a different approach. “I rather pick qualities of different people than to focus my attention on one role model.” And what qualities does she seek? “The skill of combining your work with a family life and kids.” She hits a chord there, as all the participants more or less wrestle with that issue. For Lilla having a child was the mountain to be conquered in her career as she did not want to reduce her working hours. Balancing her private and her business life was very hard, she says. “But that balance will be found, albeit later in your career, Gül responds. “For me the key was not to want to do everything myself, but to outsource household tasks. That gave me space to spend quality time with my kids whenever I arrived home. To read them a nice story.”

Lilla mentions the importance of involving fathers early on in parenting, so that they have an opportunity to really bond with their kids. “Let’s follow the Scandinavian family model where fathers get much more parental leave and where it is considered normal for them to take a few months off to be with their baby. Here a choice like that is still a big taboo. It all starts with leave policies. We should create more flexibility and make it acceptable. That will certainly contribute to gender diversity on the work floor.” And it is not only government policy that would help, Meltem remarks. “Let’s also kill the ‘mom penalty’: less chances, less career, less promotion and less salary.” ShengSheng then adds her admiration for her new female CEO to the discussion. “She manages to have a succesful career at BMO and to combine that with her family life as a mother of three daughters. How she does it? I have no idea.”

Much of what has been said around the table definitely points to diversity being work in progress. A lot has already been accomplished, but there is still much to achieve. Therefore the participating power ladies finished the conversation by laying a few calls to action on the table. “We have to make it acceptable that women can also work fulltime”, says Gül. “Absolutely true”, responds Josephine, “we all serve as role models for our children so that they will perceive full time working females as totally normal.” Being open to all different kinds of people is also the stepping stone to a more diverse and successful team, but that is easier said than done. “There is a dark side to this topic”, says Gül. “Usually we are searching for clones. While actually we should recognise differences and embrace them.” All participants are convinced that equality is a necessity on all the different levels of family, partner, employer and society. The same goes for inclusiveness, which should apply not just to gender but also to factors such as sexual orientation, cultural background and social status. The round table session ended on a hopeful note : diversity and equality may be big issues in our generation but will be less of a discussion for the next.